The History of Elgin Public Schools 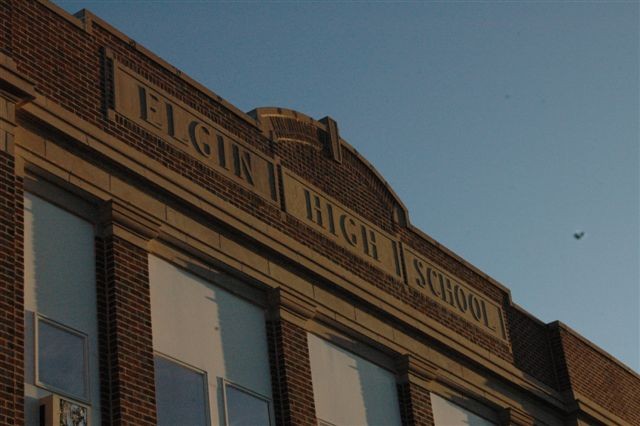 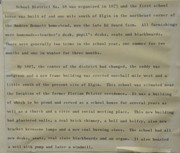 The following information was taken from the Elgin Centennial Book published in 1989.

School District #18 was organized July 8, 1874, and the first schoolhouse was built of sod one mile south of Elgin in the northeast corner of the Andrew Bennett homestead.  It faced east and was situated just west of the railroad tracks.  All of the furnishings were homemade.

There were generally two terms in the school year, one in summer for two months and one in winter for three months.  The first teacher was Miss Emily Trowbridge.

By 1883, the center of the district had changed.  The soddy was outgrown and new frame building was erected 1/2 mile west and a little south of the present site of Elgin.  It was a building of which to be proud and served as a schoolhouse for several years, as well as a church and a civic and social meeting place.

A year after Elgin was born, in 1888, the schoolhouse was moved into town and located on the present school grounds.  The building soon became inadequate, so it was sold, moved and turned into a private residence.  A new two-story, four room frame building was erected in its place. Shorty after, the school was graded, and a two-year high school course was made available.

The courses were similar to the ones offered now, but the manner of presentation was much different.  The literature class required attendance at Sunday evening church services, with a written synopsis of the sermon to be handed in the following week.  There was no library, but the students were required to give book reviews using borrowed books.

The year 1903 saw the start on a new brick building.  The building was completed in 1906 and contained eleven grades in six rooms.  It also included a full basement, which had two rooms as well as a furnace room.  In 1911, bonds were voted, and an addition was built that included an assembly room, office, two halls and a gymnasium.  Twelfth grade was added at this time.

Normal training was added to the curriculum in about 1915, providing a third grade teaching certificate at the end of a two-year course.  The course proved very satisfactory for several years.  It furnished rural schools with teachers and was a great financial help to the young graduates going out on their own.  But after a few years, there were more teachers than schools, and in 1949, the normal training course was dropped.

The fire escape was built on the north side of the building in 1917.  Then in 1919, a stairway was built to the attic, which was equipped as a domestic science room.  Before that, the girls in the domestic science class went to different homes in town once weekly for cooking lessons.

In 1924, a new high school building to the south was started, and it was completed in the spring of 1925 in time for that year's graduating class to hold their commencement exercises.  The old building became classrooms for kindergarten through eighth grade.

The current elementary building as it orginally looked in 1903 before the top story burned off in 1935
During Christmas vacation in 1935, the grade building was badly burned, with the interior being nearly gutted.  The building was remodeled and made fire proof.  It now houses kindergarten through sixth grades.  (2014 update; it now houses second through sixth grades, K-12 Art, Yearbook, Elementary Technology and Title One)

Many other physical changes have been made in the school during the years.  Mobile classrooms were used and a bus garage was built.  The latest building, the new auditorium, was completed in time for the graduation of the class of 1974.  A Vo-Ag Shop area was added later in 1978. (2008 update; the newest building is our Pre-School, Kindergarten, First Grade and Resource building dedicated in the fall of 2007)

Following the hailstorm of 1984, many cosmetic changes and improvements were made in the buildings, and the physical plant is being continually upgraded.  The Vo-Ag building is now the Resource Center to accommodate special needs students. (2014 update; it has now been taken down and the area converted to an outdoor classroom area called the "Eagles' Nest)

Athletics have always been a big part of the school.  Basketball was played as early as 1908, with the first competitive basketball in 1909.  There were no standard rules at that time, so each team made their own.  In 1913, the team went to Lincoln and won the state tournament.

Football wasn't played until 1929 and was initiated with an 11-man team.  This continued for several years until declining enrollment forced the introduction of a six-man team.  In 1961, the eight-man team was set up, but from1984-1987, six-man football was played.  The 1988 season saw the return of eight-man play. (2008 update; the 2007 Football team was the State Runner-Up!) (2011 update; the 2011 Wolfpack Football Team was the State Champion! and they were the 2012 State Champions!)

Girls volleyball and boys and girls track have all been popular through the years.  Golf was added in 1999.

Elgin Public Schools had an enrollment of 189 students during the 1987-88 school year, with Dwaine Uttecht as superintendent and Kent Edwards as principal.

Thank you to the committee that compiled this history for the 1989 Elgin Centennial Book! 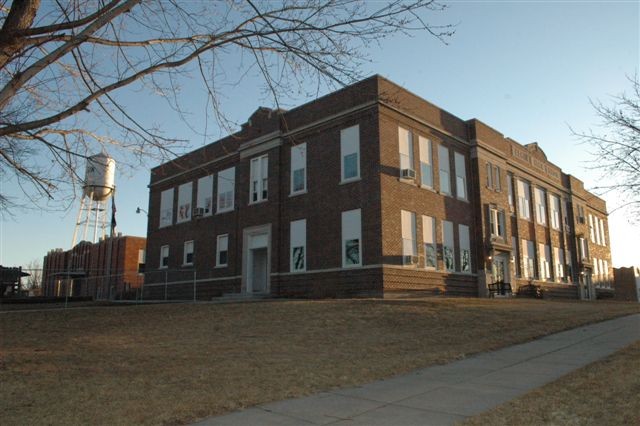 Fast forward to 2017-2018.  Mr. Dan Polk is our superintendent and Mr. Greg Wemhoff is our principal.  We have 166 students enrolled from Pre-School through Seniors.

Other notable happenings include the following over the years;

2002-The 8th grade class was no longer an independent classroom with their own teacher.  The students now move from class to class the same as the high school students.

2003-The Pre-School was added and housed in the Methodist Church until a new building was constructed in 2007.  The elementary building was made handicap-accessible through a grant which included new doorways and a chair lift.  The Art room and the Elementary Library were switched and remodeled. These two rooms, during the 60s and 70s, were the kitchen and cafeteria before the new gym was built in 1974.  Before that they were janitor rooms.

2004-The 7th grade was absorbed into the high school the same as the 8th grade class two years earlier, new playground equipment was added, the rust colored stage curtains were replaced with present gray ones and Student-Led Conferences began.  These are conferences in which the student creates a portfolio of their class work and presents it to their parents.  SLCs replaced the traditional winter Parent/Teacher Conferences.

2005-The scrolling marquee sign was added outside of the gym and the new chair lift in the high school building was installed to make it handicap-accessible.

2006-Laptop computer labs were added through a grant, the PASS system began which allowed parents to check their child's grades online,  air-conditioning was installed in the high school building and a new parking lot was put in place on the south side of the gym

2007-The new school web page, www.elgineagles.org began, the elementary building was air-conditioned and we experienced our first lock down.

2008-The Football team was the 2007 State Runner-Up in D2 8 Man.  The Music students earned all Superiors at Districts!

2009-The Elgin Public and Pope John School Boards voted to co-op sports starting with basketball the following year.  The students voted to become the Red, Black and Silver Wolfpack

2010-2011-Football and Volleyball was added to the co-op.  We were now Wolfpack in all of the sports

2012-2013-The gray stage curtains were replaced with black ones.  The eagle mascot that had been in the gym since 1989 was painted over when several large cracks in the wall had to be repaired. A sidewalk on the east side of the playground was added allowing patrons to walk there instead the street after games. The Football team won the State Championship AGAIN!!!!!  The Elgin Elementary was presented the 2012 National Blue Ribbon School of Excellence Award by Governor Dave Heineman.

2013-2014-The gym was air conditioned!  The old boiler and radiators were replaced with a new, modern heating system. The tin shed was taken down after 50 some years of service and the Eagles Nest outdoor classroom area was established in its place. The grounds were re-seeded after the devastating drought from last year killed off most of the grass.

2014-2015-New lights and bleachers were added at the football field.  New conference mascot signs were installed in the gym along with a new Elgin Eagle mascot.  New flags were purchased and moved to the south wall of the gym.

2015-2016-A new gym floor was installed replacing the original floor from 1974.  The Wolfpack logo was painted in the middle of the floor with "Wolfpack" spelled out on both ends in red and black.  A wolfpack pad was also added to the north wall of the gym.  The badly cracked and worn Cinderella steps were torn out and replaced as well.  New sidewalk lights were added on both sides of the high school building.   Elgin Public got a Twitter account and soon everyone was tweeting about all of the current events as they happened.

2016-2017-Saw many updates added to the school over the summer months and during the school year.  The school purchased several technology updates that included a 3D printer, a poster printer, a drone, smart tables and an updated WiFi.  The west parking lot was armor coated and a new parking lot and steps were built east of the gym for additional parking for games.  New steps were installed on the west side of the buildings replacing the old, cracked ones.  Several classrooms received new carpet or tile.  New doors were added in the four corners of the gym.  The two trees east of the high school building had died and were removed along with the flowers.  Replacing them were two cement eagles (Eleanor and Edwin) and rock.

2017-2018-started off with several new updates. The football field was redone.  The crown was shaved down and new sod was placed.  New doors were added to the high school entrance by the office and the coaches' office.  The old railroad tie retaining wall in the Eagles' Nest was replace with a stone one. New orange planters were added as well to the Nest.  The junior high lockers were moved down the hallway to make room for a new seating area by the office.  Students and guests could now relax on big, comfortable, orange chairs.  The elementary students received new playground equipment along with a new greenhouse.  Elgin High School was named one of America's Best High Schools by U.S. News & World Report in 2017!

2018-2019-saw many updates to begin the school year.  The junior high locker rooms were painted and updated.  The football team enjoyed their season on the field after the crown had been shaved down, new sod laid and sprinklers installed.  Auto sensor lights were installed around the school so you no longer had to turn on light switches in bathrooms and hallways.  Elgin Eagle window clings were installed in the south windows of the high school building.  But the biggest addition was THE FENCE!  A chain link fence was installed around the high school and elementary buildings and attached to the existing elementary playground fence.  A gate with a coded keypad was installed between the high school and elementary buildings to control access to the buildings.   Students were no longer allowed to enter the high school building through the east door but had to walk around to the west doors.  Coded keypads were installed by the main office and on the gym doors.

Let me know of any significant events that happened while you were in school and I'll add them to the history.  E mail me at rheithof@esu8.org