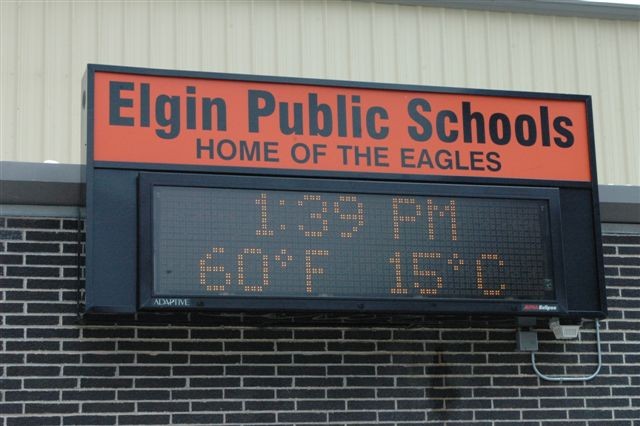 Shirley of California recently emailed me asking about photos of the campus.  She stated she could only find one photo of the school on our website and that she was interested in seeing how the school looked now.  The grounds have changed dramatically over the years.  We've added onto buildings, remodeled buildings and added entirely new buildings.  As educational needs have changed over the years so has our campus.

We have had a Pre-School for several years and completed a building to house it as well as Kindergarten, First Grade and Resource this year.  The Methodist Church generously let us use their facility for several years until our building was completed.  The tin building that was formerly the Kindergarten and Resource is now utilized for much needed storage. (If you're a child of the 70's it was the Ag building back then).  The New Gym (we still call it that even though it was built in 1974) contains Science, Music (remember when music was in the elementary building and then the Methodist Church?) and PE. An addition was added onto the New Gym to house Ag Education in 1978.  The assembly hall  was broken up into three classrooms and a fire exit hallway while the stage was converted into the library.

Click on the slide show below to see how Elgin Public Schools looks now.