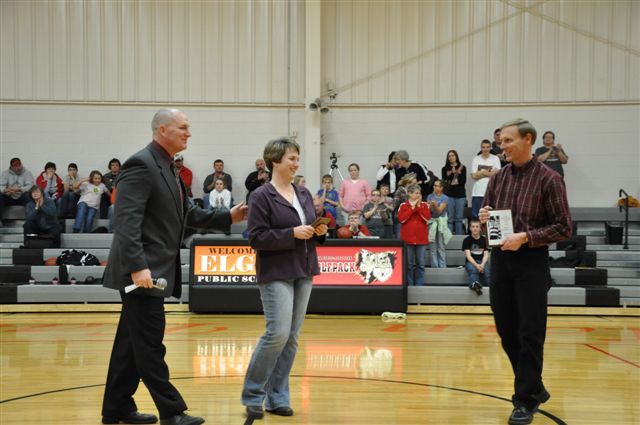 Shelli  Riedmiller Swerzck   a 1988 graduate of Elgin Public School will be inducted January 21, 2011 at the Elgin Public School/ Pope John Basketball game.  Ms. Swerzck (Riedmiller) received numerous letters and several distinguished awards throughout her involvement in Volleyball, basketball and track at EPS. She also held or holds a variety of records in many sports.
Throughout her volleyball career, she was a 4 year letter winner. She was also named a First Team All State Volleyball player in 87 by the Omaha World Herald and Lincoln Journal Star. Mrs. Swerzck was also named to the Top 12 Northeast Nebraska Volleyball by the Norfolk Daily news and a 2 year All Conference Volleyball Player.  In addition, Shelli Swercek holds many school records in volleyball. To name just a few:  Most points in a Season (157), Most Kills in a season, (255), Most Kills in a single game (33).
On the basketball court, Shelli Riedmiller Swerzck also played an integral role as a Four-year starter and letter winner. She played on the 1988 State Champion Basketball Team and helped lead her team to an undefeated season.  In addition, Mrs. Riedmiller Swerzck was selected to the All Class All tournament team, the Class D-1 All tournament team and she was selected as a All State Lincoln Journal Star and All State Omaha World Herald First team player. Mrs. Riedmilller continues to hold many records today. Such as Most points in One Game (35), most points in a Career (1492), Most Field Goals in one game (15 vs. Cedar Rapids).
In Track and Field, Mrs. Riedmiller Swerzck excelled in many running events. She was a multi letter winner in track. Today, Shelli and her teammates still hold the 3200m school record. Shelli also qualified for the state track and field meet.
Shelli Riedmiller Swerzck athletic career continued into college. She attended Midland Lutheran College where she competed in basketball.
Mrs. Shelli Riedmiller Swerzck went on to Graduate from Midland Lutheran College with a Degree in Teaching.