The newest EHS alumni, the Class of 2012

The Class of 1942
Ann Pelster Borer spoke for the Class of 1942
Donald Fleming shared memories of the Class of 1952
Dale Miller reflected on 1972
Amy Evans Selting represented the Class of 1992
Jesse Schindler looked back on 2002
Phyllis Lawson Kinney accepted the Honored Alumnus award for Donald Nyrop, Class of 1930
Bessie Nissen Hawks, Class of 1929 received the Oldest Alumnus present award. This was her 83rd Alumni Banquet! 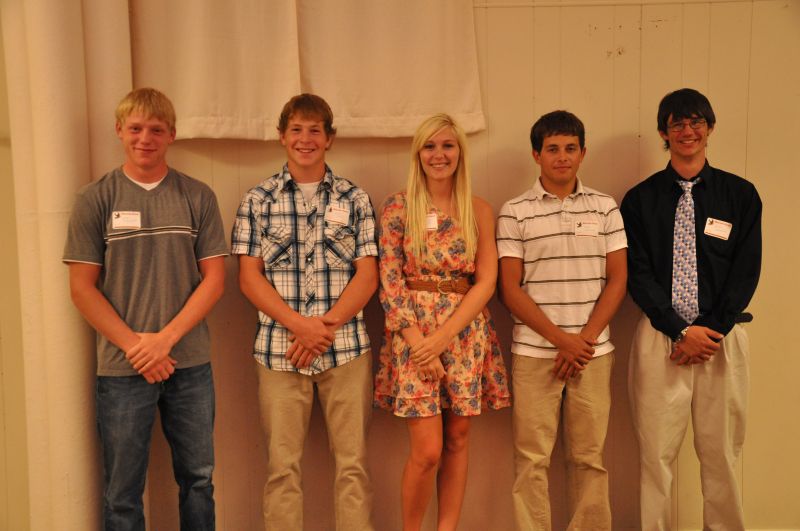 The newest EHS alumni, the Class of 2012

The 2012 Elgin High School Alumni Banquet was held on Saturday, June 23, at the KC Hall in Elgin. A total of 81 alumni, spouses, and guests from all over the United States attended the 7pm  banquet. Prior to the banquet, an open house was held at Elgin Public Schools.

Laurie Schindler Waterbury, Class of 1980, served as the master of ceremonies. Randy Nelson, Class of 1980, gave the prayer and then L Bar B Steakhouse of Clearwater served a delicious meal.

The Alumni Committee who makes the banquet possible
Alumni begin signing in for the evening
The meal was catered by L Bar B from Clearwater
The Wolfpack State Championship trophy was on display along with other EHS memorabilia
Thank you to St. Boniface Alumni for moving their banquet to the Senior Center so we could enjoy the air conditioned KC Hall!
The Class of 2012's first banquet
Even husbands get drafted to help with the banquet
Jaime Hoefer helps serve
Darlene Durre Warner
Dorsey Schalk visits with Mr. Patrick about how it used to be
Darlene, Laurie and Randy put the finishing touches on the banquet
Phyllis Lawson Kinney gave the welcome
Her grandaughter, Connor Kinney gave the response 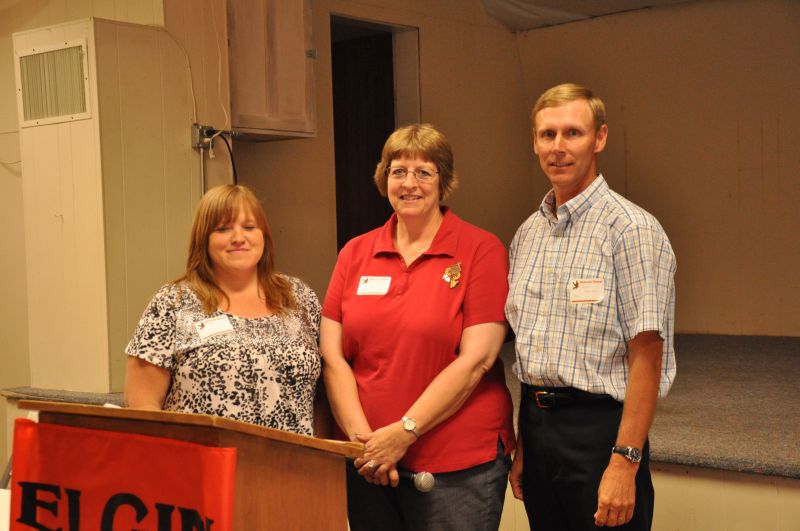 The Alumni Committee who makes the banquet possible

Following the meal, EHS Principal Adam Patrick was introduced along with the 2012 alumni committee. Bessie Nissen Hawks, Class of 1929, was recognized as the oldest alumnus present and she was presented with a floral bouquet.

Phyllis Lawson Kinney, Class of 1943, gave the welcome to the Class of 2012 and Connor Kinney, a 2012 graduate, gave the response. 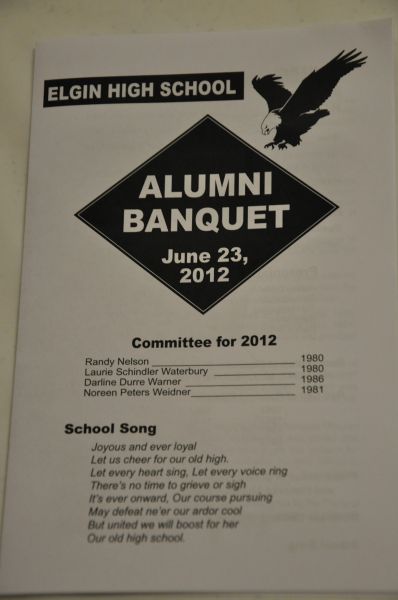 The alumni awarded $500.00 scholarships to three members of the Class of 2012. Receiving scholarships were Dean Braband, Nash Schindler, and Shane Vanis. The Honored Alumnus Award was presented to 1930 graduate Donald Nyrop for contributions to his school, community and society. Phyllis Lawson Kinney accepted the award on behalf of the Nyrop family. A certificate honoring Mr. Nyrop will be mailed to his daughters.

During the business meeting, the 2011 Alumni Banquet Minutes and 2011 Financial Reports were reviewed. Items of business discussed during the meeting included the location of the banquet next year and in 2014. Information was provided and debated about a dance following the 2014 banquet. Volunteers are needed to fill two open positions on next year’s committee. The tentative date for the banquet in 2013 will be June 22 – the fourth Saturday in June.

The banquet concluded with the school song led by several members from the Class of 1972.