Bessie Nissen Hawks Class of 1929 (85th Reunion) Oldest Alumni
Alumni President Laurie Waterbury discusses the night's events with Administration
Everyone lines up for a delicious meal
If your parents are involved in the banquet, you get to help:)
Alumni enjoyed the first air conditioned banquet at the school!
Baylee, Katie, Taya, Ally and Jack all pitched in to make sure everyone had a great dining experience
Laurie Schindler Waterbury got the night's banquet started 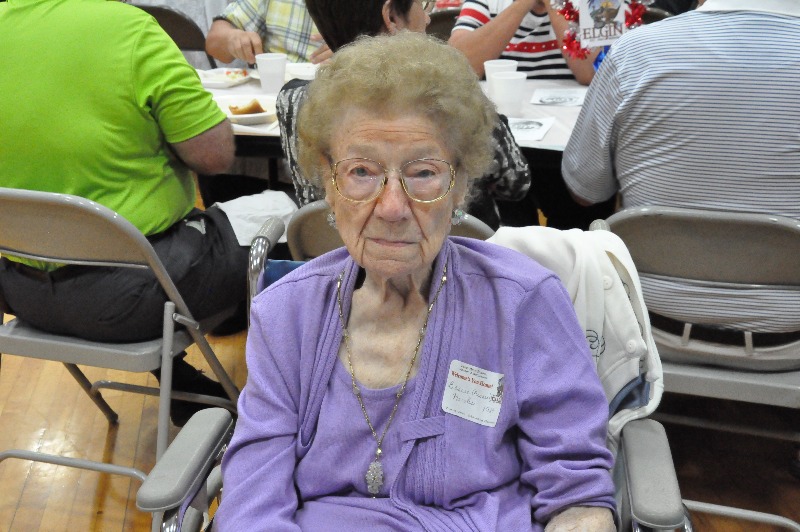 The 2014 Elgin High School Banquet was held on Saturday, June 21, at the Elgin Publlic School Gym in Elgin.  A total of 110 alumni, spouses, and guests from all over the United States attended the 7 p.m. banquet.  Mike Meis , Class of 1991, came the furthest from Stockton, California.

Prior to the banquet an open house was held at Elgin Public School.  Laurie Schindler Waterbury, Class of 1980, served as the master of ceremonies.  Darline Durre Warner, Class of 1986, gave the prayer and then the L Bar B Steakhouse of Clearwater served a delicious meal of chicken breast and baked steak.

Darline Durre Warner and Laurie Schindler Waterbury stepped down as Alumni officers. They have organized and hosted the banquet for many years. Their hard work is very much appreciated!
Wendy Schindler Voborny gave the welcome ( Centennial graduate)
Her daughter Madison Voborny gave the response (Q125 graduate)
The newest Alumni, the Class of 2014
Various classes stood to be recognized
Superintendent Dan Polk gave the Alumni updates on changes at the school...like the air conditioned gym.
Bessie Nissen Hawks was recognized for being the oldest alumni in attendance...it was her 85th reunion
"Who had Bessie Hawks for a teacher?"
Bessie Hawks taught at Elgin Public and a number of area schools for 40 years.
As you can see over half of the alumni present were taught by Bessie
Bertha Beckman Farris representing the Class of 1934
Ralph Lawson spoke for the Class of 1944
Barb Reestman Meyer discussed the Class of 1974
Julie Schrage Krause entertained everyone about the Class of 1984
Wendy Schindler Voborny spoke for the Class of 1989
Lauren Childers recalled events from her group the Class of 2004
Ivy Prater represented the newest alumni, the Class of 2014
Mike Meis travelled the longest distance from Stockton, California for the banquet
Former Ag instructor Dave Doeschot attended the banquet 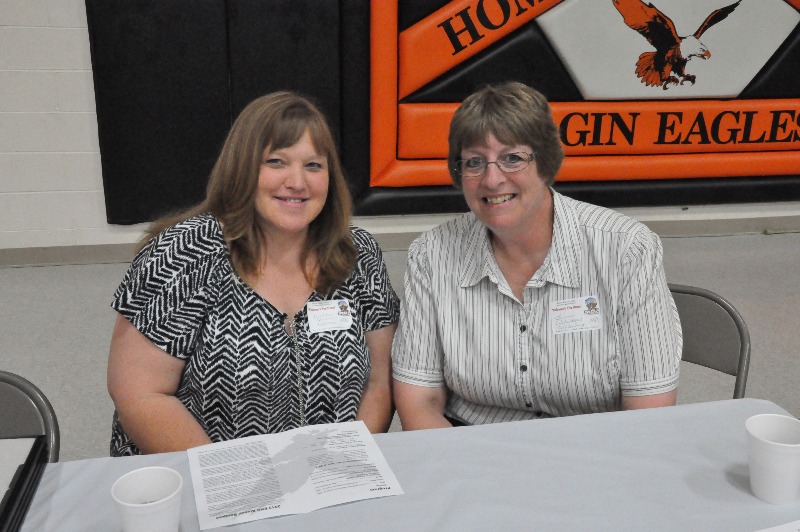 Darline Durre Warner and Laurie Schindler Waterbury stepped down as Alumni officers. They have organized and hosted the banquet for many years. Their hard work is very much appreciated!
Following the meal EHS Superintendent Dan Polk and Principal Greg Wemhoff were introduced, along with the 2014 alumni committee.  Two of our oldest alumni members, Bessie Nissen Hawks (Class of 1929) and Bertha Beckman Farris (Class of 1934) were each presented with a basket of flowers.  Bessie celebrated her 85th reunion, and Bertha celebrated her 80th reunion.

Mr. Polk shared a few jokes with the alumni, and he also shared some information about himself and his family.  He informed the group about past school improvements such as the heating and cooling systems and the addition of new lights and bleachers at the football field.  Recognized were the 5 year classes of 1939, 1949, 1959, 1969, 1979, 1999, and 2009.  The honored classes and their speakers were 1934-Bertha Beckman Farris, 1944-Ralph Lawson, 1974-Barb Reestman Meyer, 1984-Julie Schrage Krause, 1989-Wendy Schindler Voborny, 2004-Lauren Childers, and 2014-Ivy Prater.

Kathy Jillson, Class of 1975, spoke about her father, Dr. Dale B. Jillson and shared that the family wished to present a $1000 scholarship to a 2014 graduating senior to honor his memory.  The Dr. Dale B. Jillson Scholarship was given to Brett Kinney.  The alumni also awarded $500 scholarships to two members of the Class of 2014.  Receiving scholarships were Bailey Carpenter and Madison Voborny.  The Honored Alumnus Award was presented to 1934 graduate Bertha Beckman Farris for contributions to her school, community and society.

Photo courtesy of the Elgin Review

Photo courtesy of the Elgin Review

Class of 1974-Verna Vaisvilles, Scott Beckman and Barbara Reestman Meyer
Class of 1954- Darlene Hawks Heithoff and Donna Tierney Iburg
Class of 1944-Ralph Lawson
Class of 1934-Bertha Beckman Farris
Scott Beckman introduced his aunt, Bertha Farris for the Honored Alumnus Award
Darline Durre Warner presents Bertha Farris the Honored Alumnus Award
Bertha is escorted back to her seat by her niece and EHS teacher, Deb Beckman
Former EHS teachers, Bessie Hawks and Dave Doeschot discuss old times at EHS
Kathy Jillson (Class of 1975) presented a new scholarship given by her family in memory of her father, the Dr. Dale Jillson Scholarship
Brett Kinney was the first recipient of the 00 scholarship given by the Jillson Family
Bailey Carpenter received a 0 Alumni Scholarship
as did Madison Voborny
Honored Alumnus Bertha Farris
Scholarship Winners-Bailey Carpenter, Brett Kinney and Madison Voborny
And the night ended with the School Song, Joyus and ever loyal...
let us cheer for our old high! 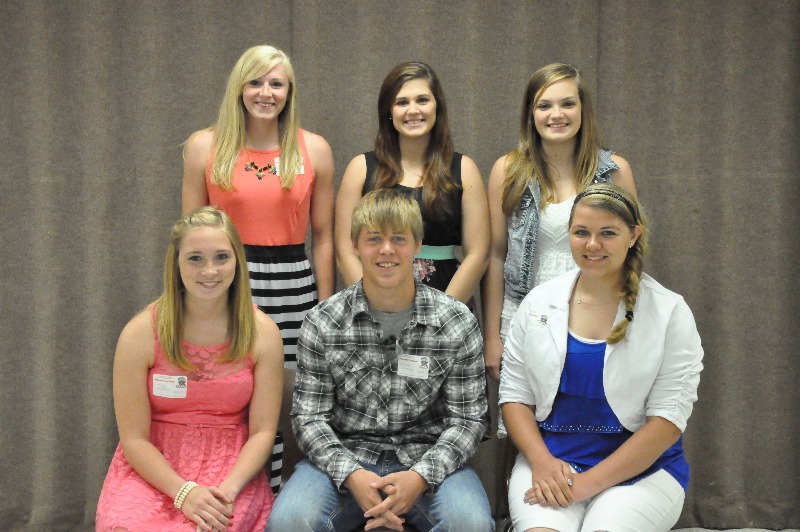 Class of 2014-Madison Voborny, Bailey Carpenter, Ivy Prater, Hunter Thramer and Hannah Kerkman
During the business meeting, the 2013 Alumni Minutes and 2013 Financial Report were reviewed.  The 2014 committee also announced that beginning with the 2015 banquet, the 10 year class will be in charge of the banquet each year.  With no objections from the alumni, the Senior Class Officers  and their class members, (with help from the previous year committee members) will be planning next year’s banquet.  Next year the banquet will be held on the 4th Saturday of June.   The 2015 EHS banquet will be held on June 27th at the EPS Gym.

The banquet concluded with the school song which was led by volunteers from our EHS alumni.